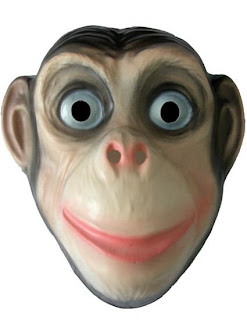 We're back after a rather long hiatus! Tonight Nora and I chat about wallpapering, moving appliances - plus we celebrate four years of Jawbone Radio by bringing up chimp mauling, chimp attacks in the news, face attacks, face transplants and much more. Thanks for listening and if you like the show, please subscribe. 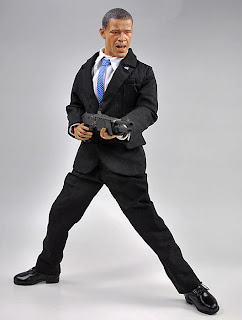 Where Have We Been?

As some of you have noticed, there was no show last week and there most likely will not be a show this week. Literally since we did the last podcast with Coulton, we have been dealing with on and off sickness/flu and tons of little stresses. I thought we might be able to do a show tonight, but I'm losing my voice and I feel like someone has a voodoo doll of me and has been poking me in the gut all day long.

Rest assured, though, that we will return next week in full force. Our guest next week (if we can get our schedules synced) will be Mythbuster's Adam Savage. And the following week, our guests will be the gang from Cinematic Titantic. Thanks for hanging with us and hopefully health will break out around here soon.
Posted by Len at 7:37 PM Red Nose Net Zombie Print Preview
Originally uploaded by jawboneradio.
I will be taking part in Red Nose Day on March 13th. This is a day encouraging doing something funny for a good cause. It was started by the Brits and the tradition is being continued here with Red Nose Net.

My contribution to the cause will be a limited edition zombie clown print that will be available for sale for ONE DAY ONLY - March 13th. Here's a little preview of the image. Also, you can take part in Red Nose Day as well, by creating something humorous and funny online during the day. More info can be found here.

Remember, the print will be for sale for one day. So stay tuned for progress as I get my art done.
Posted by Len at 4:19 PM


I should try this the next time I miss my flight. For the record, this is not my mom.
Posted by Len at 3:51 PM 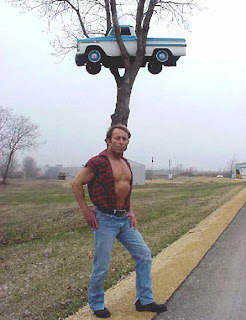 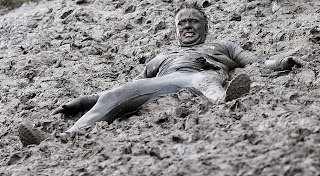 Coraline: Is This A Film For Kids?

Since I twittered that I was going to see the new Henry Selick/Neil Gaiman film Coraline with the kids, a lot of people have been asking me to give them my review of he film and if it is safe to take their children to. Even before we went into the theatre, other patrons were warning me in the lobby that this movie "was not for kids" and that they would be harboring nightmares for weeks. (To be honest, I was made to feel like I was a neglectful parent for even walking into the theatre with my gaggle of children. But I digress.)

Well to answer the question, I would say that it is not a film for "very young" children and more than likely not friendly for kids below the age of six. As many of you know, Nora and I have a baseball team of varying ages here. My two oldest (ages 13 and 11) had read the book this past summer and enjoyed it. In fact, they prefer the book over the movie. My younger three (ages 9, 8 and 6) had not read the book but had a vested interest in it, not only from their older siblings, but also because the commercials featured music by They Might Be Giants. Their interest only continued to grow when they found out that former Jawbone guest and friend, John Hodgman played the part of the father/other father in the film. Add in the fact that we are huge fans of Henry Selick's visual style, it would appear that my family was destined to see this movie.

One thing I love about this film, as is the case with all of Selick's work, is the handmade quality of the film. Its been said before, but it bears repeating, these movies by directors Selick (and let us not forget Aardman Animation) are labors of love. Emphasis on the labor. It employs the stop-motion animation style of film-making which, in this age of CGI and computer animation, seems like a dying art. But the charm of this film are the imperfections of the animation. The Harryhausen-like fingerprints that adorn the talking cat's fur. The choppy movement of the circus mice dancing on top of red rubber balls. In a CGI world, the animation would look fluid and seamless. But is the very fact that the animation is imperfect that makes it perfect in so many ways. I cannot praise Selcik and his team for keeping this style of animation alive and well.

Regarding the age appropriateness of the film: I was paying close attention to the reactions of my two youngest (I sat close to them during the film, in the event that the suspense got a bit too much). My eight year old daughter was squirming a lot, especially during chase sequences, but that was expected. And my youngest, although he said he was not scared during the film, I think was a bit rattled by the more creepier sequences.

I was expecting the creepiness, but what took me by surprise was the theater sequence in the middle of the film that featured some rather - ahem - well endowed older ladies who were wearing close to nothing during the performance. Granted the characters were puppets, but that sequence was a bit uncomfortable for me to sit through with my younger kids. Luckily, the well-placed sequins did not fall off during the show.

I felt there is a very good teachable moment in the film. When Coraline enters the parallel universe, she falls in love with how different and wonderful the world seems to her. Only when she is pulled in too deep does she realize her mistaken judgement. I found this as good way to talk to the kids about good and evil and how sometimes the bad things are things that at first feel great and wonderful. It was easy for Coraline to be enticed because she was unhappy. And that's usually how evil works. When you're too deep in, you may find it hard to correct your path. Needless to say, it made for some interesting dinner conversation after the film.

All in all, I would have to say that Coraline is not the kind of family fare that you can attend and checkout mentally as a parent. But if you and your children are up for some good creepy fun and want to be visually entertained for 100+ minutes, Coraline is a definite must see. Also, I would hope the Blu-Ray will bring some cool special features, as I would LOVE to see more behind-the-scenes.
Posted by Len at 8:51 PM 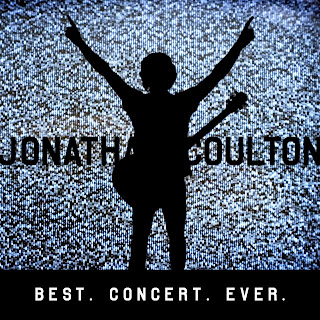 On this episode of Jawbone, we welcome back to the program our good friend, Jonathan Coulton. Along with getting all retrospective, we talk about internet fame, my art and his music, more on the Year of The Coulton and plus a Jawbone first - a live musical performance! Also, JoCo talks a bit about his new DVD/CD combo coming out soon called BEST. CONCERT. EVER. Thanks for tuning in and if you enjoy the show, please subscribe!

Flight of The Conchords Poster Contest Flight of The Conchords
Originally uploaded by jawboneradio.
I am entering the Flight of the Conchords poster contest with this little entry. I spent way too much time on this poster and probably should have been doing something else. And I'll probably end up doing more. But for now, it is what it is.

While I'm on the subject of contests, a huge congrats go out to Adam Koford and Marcus Parcus, two of the original hobo artists who won this years New Yorker Eustace Tilley Contest. As you may remember, I won with one of my entries in last years contest. I missed out on the deadline for this one, mostly because it wasn't run through Flickr. But I love all the winning entries, especially Marcus' Watchmen-inspired image. Too cool!
Posted by Len at 5:26 PM

Listener Rebecca from Chicago suggested this little plan for those hoping to attend the Cinematic Titantic event in Cleveland:

"In an effort to boost my flagging spirits, The Boy suggested that we track down an upcoming Cinematic Titanic show and, by hook or by crook, go there. As it happens, the closest show will be in Cleveland.

This is where youze guys come into the picture. But not in a stalk-y, stabby way. I thought it would be kinda cool if we could see how many JawBoners we could round up out there in your listening community who would also want to make the trip Cleveland-ward and see the show. We could all meet for dinner / drinks / brunch whatever before or after the show or something. In a restaurant, of course. I'm not suggesting that you host America for the weekend."

So, what say you? Is anyone coming into Cleveland that weekend? If so, would there be any interest in an informal get-together? Please post in the comments.
Posted by Len at 1:49 PM

Today is Groundhog Day in the US. And what better way to celebrate than with a photo of such an animal. Enjoy Captioning!
Posted by Len at 8:10 AM