TL;DR: Help me pay for trip to San Diego Comic Con. Win a great prize package! Details at the end of this post!

Last week, I launched my 50 vs 50 project again. For those of you not familiar with the project, I'm drawing 50 heroes and 50 villains (100 drawings total) in order to pay for my trip and accommodations to San Diego Comic Con in July 2012. I was able to do this last year with much success and I'd like to try to do it again this year. Going to Comic Con in July is quite important in that I am in the process of designing an EXCLUSIVE ITEM for a pretty big Comic Con presence. (I'm not at liberty to say who it is quite yet, but trust me...it's pretty cool.)

Anyway, this being Leap Day and all and the fact that we have an extra day to do something awesome, I've decided to launch a neat little promotion to help meet my goal.

I'm giving a special PACKAGES OF AWESOME to two winners who participate in this promotion. Take a look! 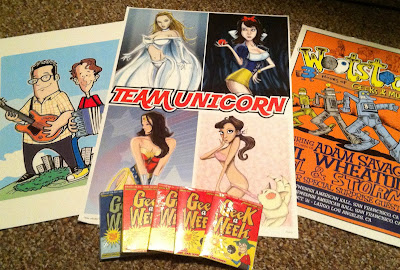 A full set of my Geek A Week cards. This includes all of Season 1 and Season 2, including the cards that are out of print! (Finally, you'll have that Scalzi card you've been looking for!)

An original w00tstock 1.0 robot poster signed by me. This one is pretty rare. You could only get them the night of the show and there aren't that many left to go around. A rare They Might Be Giants John and John poster signed by me. This one was done as a limited edition print in 2005 and only 10 of these exist! 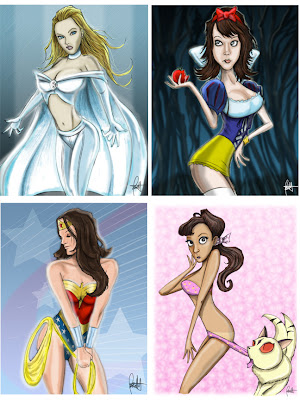 Sounds great, right? You want to get your nerdy hands on this stuff. So here's how you enter:

(OBLIGATORY PURCHASE OPTION)
1) Purchase a 50 vs. 50 Hero or Villain and your name and e-mail will be placed in a special drawing. To do this, go here.

(NO PURCHASE NECESSARY OPTION)
2) Follow my Twitter account @jawboneradio. Write a creative tweet using the hashtag #50v50. The funniest, most original and creative tweet will be chosen to win the package. Tell me why you want to win this nerdy package. Make me laugh. Whatever you do, stand out!

So get out there, promote 50 vs 50, help support my nerdy travel plans and win some pretty awesome rare stuff!

What's Up With Len

Apologies for the lack of updates. I really have been moving on since the loss of my father in the fall. And I've been very busy. Both Nora and I have had very limited time to do the podcast, what with the upcoming baby (!) and my current work schedule. I was just talking to Nora about possibly recording a new show...aaaand that's about as far as it went. I'm sure if I brought it up again, we might be able to carve out some time, but for now consider us on hiatus.

Regardless, there is a lot going on. So let's get right to it!

Monster By Mail
The monster drawing service that I created to pay for the hospital bills for the birth of my last child turns five years old next month. And I've decided to breathe some new life into it by adding GUEST ARTISTS! The first guest artist is my good friend, Sunday Williams. She's an incredible unknown artist whose stuff I've adored for years. I've been trying to get Sunday to put more of her art out there, and this is my selfish way of bringing more of her wonderful cartoons to the world. I mean, look at this piece for Punk Rock Flea: I know, right?! I've removed the video option to make it easier on the guest artists, but you can purchase Sunday's original art for a limited time right here for a mere $50!

Geek A Week: Legends of Videogames I've launched Season three of my Geek A Week project. This time around, I've narrowed the focus to showcase some of the most interesting geeks in Videogames. At the time of this writing, I've released two new geek cards. Last week's was Cliff Bleszinski or Epic Games. This week, it's Dan Paladin of The Behemoth. Next week's geek should be a definite crowd favorite. So stay tuned for that. And if you miss my sweet, sweet podcasting voice, you can subscribe to the Geek A Week podcast here.

The whole set should be between 15-20 cards and once again, like with Season 2, I am planning a Kickstarter to pay for the production of the cards. This should be happening later this spring. And I'll be sure to let you all know when that happens.

Incidentally, I am looking for some people who do machinima or 8 bit graphics for a video I'm working on. If you fit this bill, please send me an e-mail at monsterbymail at geemail.

DotCon
Between all the art and interviews and whatnot, I'm also appearing at a con! Well, sort of. It's an online convention, called Dotcon. A few internet folks got together and wanted to bring the convention experience to your desktop. It's a pretty small thing right now, but the hope is that if it's popular enough, we'll be able to do this several times a year. My panel is Saturday, February 25 at 5 PM EST/2 PM PST. I'll be drawing live with actors Tara Platt and Yuri Lowenthal. Both Tara and Yuri do a webseries called Shelf Life. But between the two of them, they've been voices in cartoons, anime and pretty much every video game ever created. (No joke. Look at this list. And that's just Yuri's!) In any event, the plan is to have them voice characters I draw live and also create a voice live and then have me create the look of that character right there in front of God and everyone.

In addition, there will be appearances and performances from other great folks like Josh Cagan (hilarious!), a concert with Mike Phirman (doubly hilarious!) and The Doubleclicks (adorable!), geek ice cream making with Virginia Corbett of Sugar Bean Ice Cream (delicious!) and online gaming with Logan Bonner (challenging!). You can read all about the events and everything here.

And one last thing I'm excited about, I created the mascot of DotCon, the robot icon we've nicknamed Robit:

He may not look like much, but there was a really cool creative exercise that took place to create him. Tune into my panel to hear the whole story!


50 vs. 50
On top of all of this, 50 vs. 50 is coming back to help me raise funds to get to San Diego Comic Con. I wasn't planning on attending this year, and then I found out I was going to create something EXCLUSIVE for Comic Con! (!!!) I can't say too much more, but I'm way excited to be working on it. I had told Nora I can't go this year because of the baby and then when she found out about what I was asked to do, she said " Well, you HAVE to go now." So, you see, this is all about fulfilling my wonderful wife's wishes for me to attend one of the largest nerdy conventions of the year. :)

Stay tuned to my updates on Twitter to keep updated.