Now It Can Be Told: My Comic Con Exclusive

Hey gang! Comic Con is this week!  I will be there from Thursday- Saturday doing at various locations around the con basically hanging out and seeing friends.  But mostly, I will be there supporting my first ever Comic Con Exclusive!

Over the past few months, I've been tweeting about an exclusive that I was doing for Comic Con for Discovery.  Today, I can let you know what the exclusive will be...(drum roll)...I have been working on an exclusive Comic Con only Geek A Week set of the MythBusters! 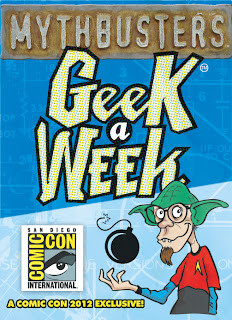 That's right. I was hired by Discovery to create a brand new original set of Geek A Week cards for Comic Con. Here's a quick peek at them.  It's six original cards with brand new backs written by Storm of Paul and Storm.  (That's right I said six - this includes a new card of good ol' Buster.) 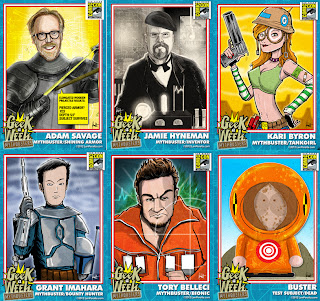 And because many of you have asked me about whether or not these cards will ever be packed with that cardboard-flavored piece of gum that old school trading cards always come with, I've gone and done one better and had three stainless steel tags created for the sets.  Each set comes with one of the following tags. (FYI, "CONFIRMED" is the chaser tag as there are only a *very* limited number of them made).  Check it out: 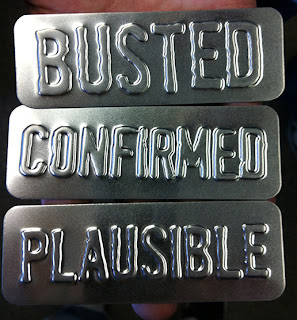 The good news is that I will have a limited number of these Comic Con Exclusive MythBusters Geek A Week sets at Comic Con!  If you're going to be there, here's how you can get one.

Follow me on Twitter at @jawboneradio.  I'll be placing these sets at various places around Comic Con and giving photo hints of their whereabouts. If you find one, @ reply me so I can retweet it and I know you've found one.  There may also be some Discovery street teams handing these out at the Con as well. Know that the CONFIRMED tag is the chaser, so if you get one of those you are super cool and have definitely gotten a rarity.

I'll also be tweeting about where I am at Comic Con all weekend long and if you find me and say you've seen my tweets, you can grab a set of these cards for yourself.  (I'll be doing a signing on Friday with ThinkGeek at 2PM. That's one place you'll be able to get them.)

Remember, this is the only way you can get these exclusive sets for right now, so good luck! So happy to have worked on this and so happy to get them into people's hands.