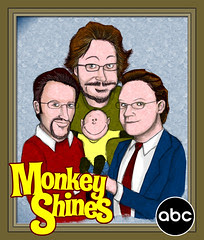 Monkey Shines Promo Painting
Originally uploaded by jawboneradio.
For those of you who didn't know, Jonathan Coulton, Paul and Storm had a very short lived sitcom on ABC in the mid 80s called "Monkey Shines". The show was cancelled midway through the pilot and all parties involved thought that the show was erased from existence.

That was until last week, when the opening credit sequence surfaced on YouTube and renewed interest in the project.

I was a big fan of the show and tend to be a packrat with things I enjoy. So during a visit at my parents house this past weekend, I went to the basement and found this rare Monkey Shines Promo Painting that ABC had in their marketing for the show. The painting was to be used for an alternate opening credit sequence that was scrapped after Family Ties did a similar opening sequence. I've uploaded it to my Flickr account for all to see. It's great to be a part of this revival. Hopefully we'll see a reunion show soon?
Posted by Len at 10:14 AM