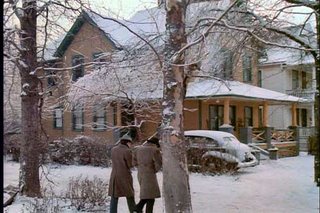 ...besides visiting us of course. A local resident has decided to buy the house where "A Christmas Story" was filmed in 1983 and turn it into a tourist stop:

"The Grand Opening of A Christmas Story House, now restored to its movie glory, will take place on Saturday, Nov. 25. Also opening directly across the street from the house is the official A Christmas Story House Museum, which will feature original props and memorabilia from the film, as well as rare behind-the-scenes photos. Actors from “A Christmas Story” who played Randy, Flick, Scut Farkus, Grover Dill and Miss Shields will officiate the opening ceremonies."

For those of you not from Cleveland, you have to understand...this is a very big deal. Before A Christmas Story, the only movie of note that was shot here was "Those Lips, Those Eyes" with Frank Langella. What a pile of crap. Oh, and some parts of "The Deer Hunter" were shot in Cleveland's Little Italy. Come to think of it, American Splendor was shot right here in Lakewood. And this past spring, we saw the crew of Spider Man 3 blowing up cars right downtown on Euclid Avenue...

But A Christmas Story! Come on! This movie is such a time-honored, iconic tradition every Christmas. Our neighborhood actually looks a little like the neighborhood in A Christmas Story. It's one bright, shining moment in Cleveland history. And I, for one, find this very cool. So, start making your plans today! What a great way to kick off the Christmas season...by spending it with Messy Marvin!