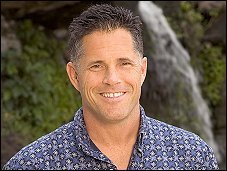 I don't know how many other people reading this blog are fans of Survivor: Exile Island, but Nora and I have been watching it and we're big fans of the show. Last night was the big finale and it found Fighter Pilot Terry Deitz up against freeloading yoga instructor Aras Hausmanfredgensen and chesty Medical Sales Rep Dannielle someone or another. We were big fans of Terry through the entire show. He dominated in challenges and really did deserve to win the show based on his competitive spirit.

But he said something last night that made us think that perhaps there was more to his rivarly between million dollar winner, Aras and himself. The question that host Jeff Probst asked was about the father/son type rivalry between Aras and Terry. This is what Terry said.This will probably end up in the feed for our show and many people will be wondering the same thing we were wondering when we watched it last night...WTF was Terry talking about?
Posted by Len at 12:52 PM