Link Dump: Round Up Of Random Weird Stuff Issue 5 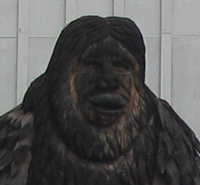 This week's Link Dump features photos from lsteners. So I guess we can call this the "Jawbone Scrapbook" portion of LD. Or something clever like that. I got nothing.

Recently, I've gotten some pretty cool photos from fans and listeners and I thought I'd share two of them with you. The first is from Dan Burke who we featured at the end of show 111. They played a cover of Jonathan Coulton's song "First of May" in front of Swem Library at William and Mary. According to Dan, they got attention from various folks:

"We actually performed the song twice. The first time, no one was really listening and I think we scared away an old dude. The second time, we played for a really hot girl, and she enjoyed it."

Hilarious. Lucky for us, they documented the event on black and white film and shared it with us. You can see a large version of their photo here.

Wayne from the UK sends us this video about the last time someone "made whoopee". It's pretty funny actually.

Also, Wayne wants to know: Are you an average homeboy? Take the test. This will count toward your final grade.

DJ Hojo send us this little dittty: Cosby Bebop. Oh, and are you part of the Secret Wars? Enlist now.

And remember the Ooze Squirtgun from a few weeks ago? It met the movie Office Space and here's what happened.

And that will do it for Link Dump this week...that should give you enough to do while you are supposed to be working on your GPS reports. Enjoi!
Posted by Len at 8:33 AM