For those of you who are curious as to what a "Nobby Annex" looks like... 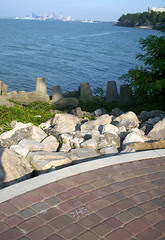 Please let me show you what may very be the only known photo of me in the Nobby Annex that exists online. What is even weirder, the photo was taken by none other than Adam (aka Apelad) Koford from Show 125 and the 700 Hoboes Project. The photo above is also taken by Apelad and depicts yet another hobo sign (an H in Sunrays) not far from my home in Cleveland, OH. It is not the photo in question though...

I know what you're saying..."Enough with the chatter, bub! Just get to the damn Nobby Annex pic!" And so,here it is.

Also, for those of you who are curious as to how my artwork would look in say, your study, or den, I give you this photo from Greyanenigma. Now go out and buy some for your walls.