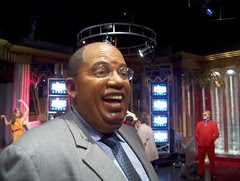 Happy Thanksgiving everyone. There has been a bit of controversy with the 700 Hoboes project. Apparently, I can't have a Flickr set of just illustrations. So a few cartoonists, myself included, were banned (temporarily) from the project. Anyway, I've started uploading some photos to my Flickr account and this is one of them. My meeting with a wax Al Roker last Feburary in Vegas.