Stan Lee's Who Wants To Be A Superhero 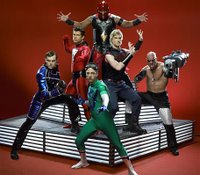 Ok, so I Tivo'ed Stan Lee's "Who Wants To Be A Superhero" last night on Sci-Fi and I have to say, I was fairly impressed. If you can get past the major geek factor of people who have made up their own characters and thier lousy costumes (Cell Phone Girl? Come on...) the premise of the show isn't too bad. Stan Lee is looking for superhumans, not superheroes. He wants the kind of people who would do the right thing in any situation...he wants real bravery, chivalry, concern and care. I'm excited to see the next episode, even though it is on Sci-Fi...

Anyone else watching it?
Posted by Len at 11:12 AM